The young woman had paid two dollars for a fountain pen and ten cents for a bottle of ink. She carried 200 blank forms which, by the end of the day, felt like a ton of lead. Summoning courage she approached each door, never knowing what to expect. Foul smells, foreign words, curses, and jabs to her face were not uncommon receptions.

At one house she received an offer of marriage from a recently widowed man. At another she faced a woman shopkeeper, her sleeves rolled high and arms akimbo. “Not one word do you find out from me,” the shopkeeper said. “Let them send a man who knows his business if they want to take my senses.” It was 1890 and the young woman wondered if it was worth the $20 she would be paid for her job as a census-taker. 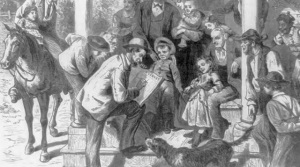 Male enumerators had their own hardships. They often carried little bottles of ink in their lower left hand vest pockets. One man, while getting information, upset his bottle and ruined the household’s beautiful carpet. Many people distrusted them, thinking they were tax collectors.

Between 1790 and 1850, only the names of heads of households and the number of other members present were recorded in the census. Starting in 1850, the census bureau attempted to record every member of every household, including women, children and slaves. Until 1870 the census was managed by the US federal court districts. There was no self-identification, so the U.S. Census Bureau relied on local people who had knowledge of the residents to conduct the enumeration. 1880 is the first census that allowed women enumerators.

While researching census-taking for my novel set in 19th century England, I learned that the enumerator would distribute 100-200 schedules which were to be completed on “census day”. After a few days he returned to collect them and make sure they were properly completed. Many times, due to the high percentage of illiterates, he had to write in the information himself. Misspelled names like Emos for Amos and ages rounded off prove the census is not necessarily accurate. The enumerator only counted those who slept in the house the night before census day, so not every person in a family was registered with their household. This is true even today. Sometimes the census record brings more questions than answers.  A girl of about five years was counted with a different family down the road in the 1850 census. Why had she gone there that evening? Why had the widow, counted with the family on census night, come from a neighboring village? These are questions I answered (from my imagination, of course) in my novel.

Historians, genealogists and the average keeper of family history, aware of possible inaccuracies, thrill at the discovery of previously unknown data. You never know what you will find in these hand-written records, thanks to the unheralded enumerators. Trying to earn a few extra bucks they have become an important part of our history.

Leafing through aged locally published newspapers in the archives of our historical society, I came across an article in an 1890 edition entitled “Taking Her Senses” It caught my attention because of research I had done on census-taking in 19th century England for a scene in my novel. To me it was a 125 year old treasure. Were any of your ancestors census-takers in the 19th or 20th centuries? I wonder what wild stories they would tell.

The illustration is a contemporary drawing of a government census taker in 1870. (Library of Congress)