“Mom, it would mean a lot to me if you would make a brownie cake for our rehearsal dinner.”

The picture on his cell phone showed a stack of brownie bars flowing with grapes and berries. I felt honored that he trusted me to replicate this beautiful dessert, especially since I only had a photo to go by. But, it was one more thing to do for his wedding besides catering a rehearsal dinner for 40 and preparing for the arrival of family and friends from WA and CA.

Though I spent most of a day mixing batter and figuring out how to use silicone brownie bar pans, I managed to come up with about 80 brownies, hoping there were enough to stack.

The next day, after several attempts (and a dash of frustration) at stacking the bars like building blocks, my sister and I sighed with relief at the resulting three-layered brownie ziggurat.

As we drove to the venue, I held the very heavy cake in my lap, hoping it would stay intact.

During the rehearsal, my sister and brother-in-law made the dessert beautiful by lavishing it with fruit. (The bottom layer of brownies is covered.)

Matt, I hope you liked your brownie cake. 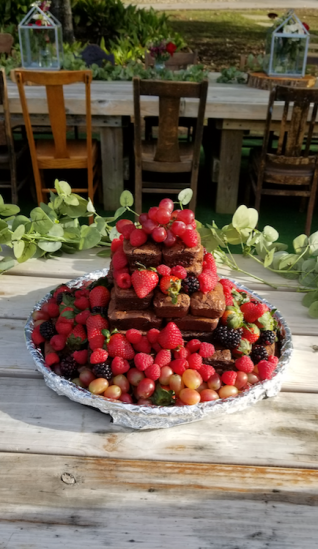